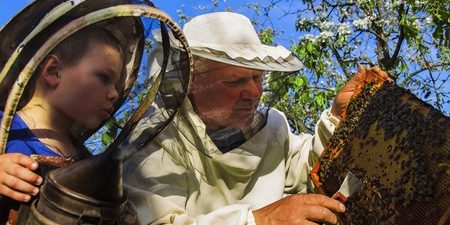 According to veteran North Carolina beekeeper Carl Chesick, he used to be a rather anti-social guy back in 2002, which wasn’t necessarily a problem for him—he could work on Green Goddess Apiary, the name of a 14-acre operation he started with Joan, his wife, in quiet, calm solitude. However, as Chesick became more involved in the Center for Honey Bee Research, of which he is now president, he not only came out of his proverbial shell, but he’s also become devoted to finding out what has caused honeybees to die off so rapidly in the last few decades. While colony collapse disorder (CCD) reports aren’t as bad as they once were, the issue is still a prevalent one.

When Chesick began asking the right questions about bees, he found his way to the North Carolina Beekeepers Association and his area’s local chapter. He then committed his time and effort to the nonprofit honeybee research center’s major project—Project Genesis, which has now operated for six years as a longitudinal study tracking bee cycles, requiring nearly 150 volunteers. Once per every two-week period, volunteers gather data via 20 colonies on the center’s property in West Ashville, recording hive weight, pollen color, details regarding the queen bee, any trace of disease, and other pertinent information.

The project’s hope is this data will one day answer not just why but how honeybee populations are declining. “It’s fascinating,” Larry Sanders, a Project Genesis volunteer, said. “The colony goes through an annual cycle…Going in and looking at them one time won’t give you the understanding we can gain by measuring.” Chesick also said, “[The colony] has an intelligence about it that looks centrally controlled, but it’s a collective effort.” If the hive has become too warm, Chesick says, one bee starts fanning its little wings for cooling things down before bringing in others to help.

By Chesick’s account, Project Genesis did not start with the intention of proving a specific hypothesis and will not push itself to show support for one theory, which he fears other industry-funded honeybee researchers could be doing. The longitudinal study is more about identifying trends that warrant closer inspection, therefore identifying further research possibilities. For instance, the project found this year that hives treated for mites fared better than a control group, which was surprising since for the past five years, the two hives showed similar survival rates. The great question for the years to come is what lead to the differences this year.

Chesick says that, for the future, “We’ll have megadata because our idea is to have…hundreds of thousands of beehives online from all around the world that are reporting in real time to the hosting website.” From all this data, the hope is that a surefire answer to the pollinator question will emerge. Until then, Chesick’s team of volunteers will continue putting the work in and getting it done each week.