Raising and Caring for Goat Kids 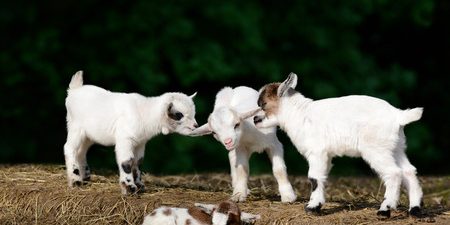 For those who elect to take up the challenge of raising goats, assuming they have both the time and space to do so, they can expect to be caring for goat “kids” sooner rather than later, especially when raising dairy goats. Providing the proper care for goat kids as well as the right shelter and feed are crucial for helping them mature into hearty, healthy adult goats. To get an idea of what this endeavor would entail, follow our tips below in addition to the advice of your livestock vet regarding care and treatment.

Immediately following a goat kid’s birth, owners ought to be present as well to ensure better socialization later on. Let the baby goat’s umbilical cord break naturally, only trimming when it’s more than four inches long using sterilized scissors and then cleaning the cord using iodine. If possible, simply leave the kid with its mother, allowing time for her to clean it and for both to bond. The mother may eat part of the afterbirth, which is fine—you should just stay to the side and monitor everything to be sure nothing goes wrong.

Make sure you see the kid nurse within its first hour—if not, it will require being bottle-fed colostrum, a natural first milk from the mother that provides valuable antibodies but can also be got from another mother goat or a feed store if need be. If you want the kid to remain mother-fed, work to make sure it nurses from its mother even if you had to bottle-feed colostrum. If you do intend to bottle-feed, you’ll need a bottle and nipple sizable for goat kids, suitable milk replacement, and, if necessary, colostrum replacement.

Transitioning from the Milk

Owners can start offering kids small amounts of feed when they’ve hit one week of age in order to kick-start their rumen development. Weaning typically occurs around four weeks of age, but this can also happen between six and eight weeks. You can also offer fresh water, small amounts of feed, hay, and even pasture time to kids at roughly 30 days, but be sure they don’t transition over to hay too quickly, as this could result in bloating and other digestive issues.

Goats mostly eat hay, roughly 80 percent. Around 15 percent of a goat’s diet ought to be hay pellets or weeds and pasture, with only five percent being grain. Goat owners must also provide both adults and kids with loose minerals or one mineral block. Regarding kids, slowly lower how much milk they’re getting until they’re eating exactly like adult goats.

Goat kids require a warm, dry, and draft-free shelter with some clean bedding, with one goat needing around ten sq. ft. of space within it. Wood shavings or hay can work as bedding to cover the ground. Once they’re on pasture, goat kids need pasture without a great deal of waste or manure on it. Also, avoid any pasture with rhododendrons or azaleas or allowing the goats access to moldy grain—all of which would be poisonous for them. Goat kids should be kept separate from adult goats who are not their mothers, but they should be socialized occasionally as well. This may require another pasture in order to ensure the kids remain healthy.

Among the many goals of goat farmers should be to raise the calmest, tamest, most human-friendly goats as possible, which will require the goats becoming familiar with your presence, especially for farmers who aren’t bottle-feeding goat kids. Also, allow them ample time to socialize with the entire herd to ensure that no fights break out later, resulting in one or more goats injured or worse. ​In case any bullish behavior breaks out and any bleeding occurs, remember to seek vet attention for anything a Manuka honey wrap cannot solve on its own.