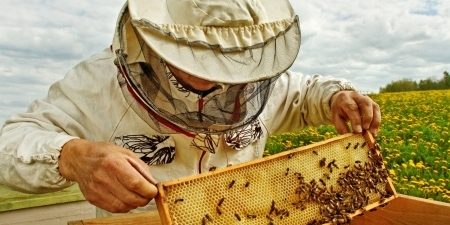 While many who work in education have gone out of their way to inform young people about the plights honeybees face today, not many teachers actually bring the bees to the students – to work with and care for for an entire semester. Jared Lewis, who teaches science at the Hartford Magnet Trinity College Academy in Connecticut, moved to have an elective beekeeping class added to the school curriculum. Lewis’s students, while initially a bit skeptical, have taken to the class, and it’s quickly become one of the most sought-after classes in a school that features everything from robotics, botany, forensics, marine science, and computer science.

Lewis, a hobbyist beekeeper, began working with honeybees several years ago after Mrs. Lewis and himself began debating over whether the two of them should raise honeybees or chickens at their home. Library excursions and a tour of the Eastern Connecticut Beekeepers Association fueled Lewis’s curiosity about the little pollinators. One year and 75 bee stings later, Lewis reckoned his students might also enjoy caring for bee colonies. “He kind of asked us if we liked the idea of beekeeping,” said John Reyes, a Hartford Magnet senior. “I told him I didn’t like bees…He asked me if I’d take the class. I said, ‘Yeah.'”

While the school board said no almost immediately, Sally Biggs, the school’s principal, was a bit more open-minded. “I thought it was great — very interesting for the kids, and [Lewis] was passionate about it,” she said. “I knew we’d have to jump through some hoops to make sure we could deal with the risk part of it.” To dispel liability, the class is voluntary, and students, along with their legal guardians, must clarify via a waiver that the student doesn’t have a known bee allergy and understands he or she may be stung.

Hartford Magnet, one of the only Connecticut public schools to teach beekeeping as a class, features more than simply learning about bee development and identifying a hive’s queen bee. Students harvest their very own honey as well, which they sell at the school and the local farmer’s market using “Phoenix Honey” as their label after their school’s mascot. They also craft scented candles out of beeswax in the shape of roses, owls, hearts, maple leaves, and butterflies and put them into gift bags along with hand cream and their “Bee-licious” chap stick.

The Connecticut state apiary inspector, Mark Creighton, was ecstatic upon hearing that a high school was in the honeybee business. “Some school boards aren’t very receptive to the program, and they put on a lot of restrictions, which pretty much dampens the interest,” Creighton said. “I certainly do my best to try to educate those folks and let them know that bees and beekeeping is…a wonderful program for schools to adopt because we can relate all the core subject material to a beehive.” Considering roughly 44 percent of bee hives collapse on average per year, it’s great public schools are taking a healthy approach to an ongoing problem.