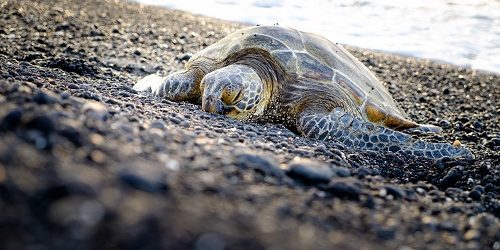 Down on the coastal tip of Texas, specifically in South Padre Island, a nonprofit by the name of Sea Turtle Inc. works to rehabilitate injured sea turtles, even occasionally using Manuka honey to help with their injuries along with the rest of their treatment. And with nearly all their patients, the compassionate staff need to face the hardest part of the job when they must say goodbye and release these magnificent creatures back to the sea. In the next week, they will be releasing their latest patient and allow the public to come and witness the ceremonious occasion. Anyone participating will get to cruise the bay while searching for dolphins during sunset in addition seeing the departing turtle, Redd, and learning his story.

Back in August, the nine-pound green sea turtle was discovered stranded on the jetties close to Isla Blanca Park, and he was covered in fishing line with a hook in his front right flipper. Many green sea turtles are found on the jetties, as they like eating algae off that area’s rocks. Chris Gorman, a rehabilitation intern, found and freed Redd after he became ensnared in the fishing line. “It’s very exciting and kind of emotional to see the whole process from the day we picked up Redd and to seeing it go through the rehab process all the way to the point where now Redd’s able to be released,” Gorman said.

Nina Nahvi, a licensed vet technician with Sea Turtle Inc., said that many people will often cut turtles free when they get hooked in fishing line. However, this actually isn’t their best choice, with Nahvi clarifying, “Quite often, turtles in these situations have hooks in their body or other issues, so it’s much better to not cut the line and instead call our Sea Turtle Inc. hotline right away, so we can get out there.” Based on Redd’s weight, vet technicians determined he was under five years of age, and green sea turtles aren’t considered sexually mature until they’re between 20 and 25 years of age.

For about six weeks, Redd underwent cold laser therapy while also being given medical grade Manuka honey to the wound left by the fishing hook in his flipper. However, because of his healthy condition upon arrival, Redd didn’t require a long stay with Sea Turtle Inc. During his entire stay, Redd was alert, active, had a good appetite, and had healthy, strong blood levels. According to Nahvi, there is nothing that compares to the feeling you get when you release sea turtles back to the sea.

“I’m basically just taking care of injured sea turtles, which is my dream job, but the absolute best part of my job is the releases, because that’s everything that we work toward in the rehabilitation department,” says Nahvi. “Sometimes, it can be a little bit bittersweet, but it makes all of our rehabilitation department know that it’s all worth it in the end when we get to see the turtles swim off for the last time.”

Are you ready to try Manuka honey? To get your order started, click here. And, remember, we take care of the shipping for all orders of $150 or more.