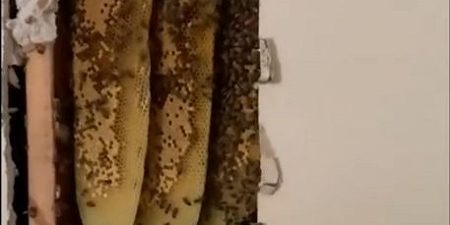 We are often amazed at stories where people find a small hive in their home that had gone undetected for years. Stories like this, however, leave us all shaking our head as to how these bees were not discovered prior. A family on James Island, SC will have such a story to tell for the rest of their lives.

According to local reports, an exterminator treating the home for wasps made the discovery. A hole was poked in one of the homes’ walls and more than four dozen bees flew out. Molly Pali, who owns the home, stated, “That’s when we knew we had a situation on our hands. I don’t know what makes bees buzz, but we did not hear anything.” When a larger hole was cut into the wall, three large honeycombs were present and roughly 80,000 bees were working feverishly to make their honey.

Pali’s daughter, Annie, thought something might be up when seeing bees around her window. She stated, “I saw bees flying around inside of my window. I knew there was something going on because there were so many bees everywhere.” The honey bees must have been using a small crack for hole in that area to enter and exit the home when looking for food and returning to the hive.

After the bees were discovered, the family waited on local honey bee expert Jim Strohm to come out to evaluate the situation. When Strohm arrived, he cut a 1’x4’ hole in the wall, which is when the real discovery happened. Strohm stated, “There were three combs in there, and they were packed with the nurse bees. The top was full of honey.” Strohm used a special vacuum to remove the bees unharmed. As for the honeycombs, he stated, “I’ll cut the comb out and save as much of it as I can. Then I’ll rubber band it and it put it inside a hive.”

According to the report, the bees were safely transported to West Ashley and were placed inside their new home where they are already getting to work creating more honey and pollinating a local farm. For their troubles, the Pali family harvested the honey and now has a pantry full of fresh, raw honey.

Since you probably don’t have a wall full of bees, you may want to order some raw honey from ManukaHoneyUSA. Our New Zealand Manuka Honey has a rich flavor, unlike anything you have probably ever tasted before. To learn more about this special honey or to place an order, click here. And, remember, we offer FREE shipping on all orders of $150 or more.