The Ingredient That Prevents Bees from Being Queens 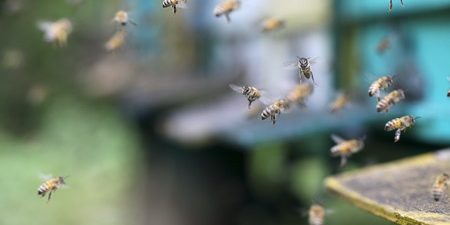 While not everyone is versed in the specifics of how honeybees develop from larvae into full grown adult bees, most do know that royal jelly is what turns a larva into a queen bee rather than a simple worker bee. However, a recently published study took that knowledge even further and discovered there is actually a molecule in bee bread—the pollen and honey mixture normal bee larvae feed on—that does the opposite of royal jelly, causing the physical changes that lead to bees who forage and maintain the hive rather than breed.

Researchers have known for a long time that differences among bees are determined by diet and not birth, though past research was focused on royal jelly, which is secreted by nurse bees. With this new study, published in PLOS Genetics, another equally effective substance was discovered in bee bread – microRNA from the plant pollen worker bees foraged. These molecules, which affect a plant’s colorfulness and size, affect a bee’s genes by delaying physical development while also sterilizing it. According to Dr. Chen-Yu Zhang, a biochemistry professor with China’s Nanjing University who also co-authored this new study, “Neither substance is sufficient alone. The royal jelly and plant microRNA work together to affect caste formation.”

For Zhang’s study, researchers raised a set of bees in a lab to study plant microRNA within bee bread and its effects. They discovered larvae raised on bee bread diets developed both smaller ovaries and smaller bodies in general compared to those that did not consume plant microRNA. Additional experiments indicated that a common kind of microRNA in bee bread specifically targets a gene in bees, TOR, and it helps determine a honeybee’s caste. This insight could potentially shine a light on colony collapse disorder and how it came to be. “We could check if changing microRNA in certain plants can cause the disappearance of the honeybee,” says Xi Chen, another of the study’s co-authors.

Something else the study shows is an interdependence of honeybees and plants, as plant microRNA is also crucial to how certain flowers form, per Zhang. These molecules could make flowers more colorful and larger, which would attract more honeybees and help spread seeds – a sign of co-evolution. According to Dr. Philip Askenase, a pathology/medicine professor with Yale’s School of Medicine, this is a growing research area. “Here you have evolutionary dependence of the creature and the plants. They are mutually contributing microRNA to each other. That’s a big deal,” he said.

Askenase further speculated that research into how plant microRNA affects different species—from insects and plants to humans and plants—could discover therapeutic applications for suppressing allergic reactions as well as for cancer treatments. “Some important biological problems could now be addressed with this new knowledge of how nature works,” Askenase said.