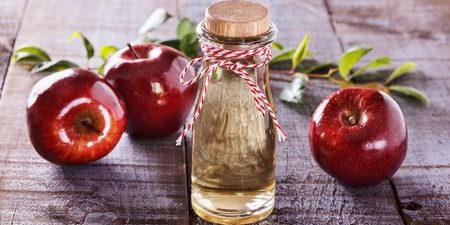 For Victoria Beckham, the former Spice Girl and now internationally recognized businesswoman and fashion designer, her Instagram page has become a sort of go-to place for health tips. During this past week, she shelled out another that has brought a few health experts into the mix to either confirm or deny the legitimacy of her claims. Not long after describing grilled sunflower and pumpkin seeds as a common snack for her children after school, Beckham listed another food choice—apple cider vinegar, two tablespoons’ worth.

The 43-year-old Beckham says she uses it during mornings before she’s eaten, and for those thinking it sounds gross, Beckham also warned her followers to “be brave,” which likely provides a solid idea of the taste. While there are some claiming apple cider vinegar aids digestion, several health experts have urged caution and research before diving in. Carolina Brooks, an herbalist, nutritionist, and functional medicine expert, claims there are various possible health benefits related to apple cider vinegar, but there’s more people should know before deciding to shoot it down at dawn.

“Raw organic apple cider vinegar is a great natural fermented food containing healthy probiotic strains with numerous health benefits, and the acetic acid it contains is a natural antimicrobial. It’s great mixed with Manuka honey and used as an immune elixir, winter tonic, and cough and throat remedy…” Brooks said. “Occasionally, people with histamine issues may not [tolerate raw apple cider vinegar], so, if you notice…allergic symptoms, skin issues, headaches, an upset stomach, or blood pressure dysregulation, then I would stop taking it and investigate your health concerns.”

Julie Haigh, a naturopathic nutritionist and therapist, added, “You should add a dash of cider vinegar to warm water and drink it first thing in the morning to help restore the fluids lost overnight, regulate blood sugar levels, improve heart health, and lower blood pressure.” Also, for those hoping some apple cider vinegar every day will give them a waist just like Victoria Beckham’s, the short answer is that it won’t. Olivier Sanchez, a nutritional therapist, stated that when celebrities ignite health or diet trends via social media, it is often not only the question of if they’re promoting bad or good ideas—it’s also how the information is construed.

“[Apple cider vinegar] upon rising is not what naturopathic nutrition advises and is not an answer to weight loss. Taking two tablespoons…and not changing diet and lifestyle will have very little effect on the body and fat cells,” Sanchez said. He stresses apple cider vinegar should not be viewed as something that acts just like lemon and warm water right after waking up. “Apple cider vinegar must be taken before a meal to assist the breakdown of food. It can be mixed with cold water and/or Manuka honey to boost the therapeutic effect…one tablespoon of apple cider vinegar is enough.”

Diluting the vinegar and consuming it before meals can also help protect the teeth’s enamel from damage. According to dentist Rhona Eskander, “Enamel erosive wear is a cumulative process triggered by repeated acid attacks, mainly attributed to a culture of grazing and a rise in ingestion of fizzy drinks, sports drinks, fruits and juices, vinegar based dressings, wines, and cocktails. The signs of enamel erosion of the teeth include yellowing, cracking, thinning, and increased sensitivity.”