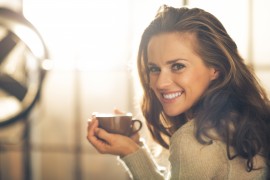 Exploring the Claim that Hot Beverages Will Ease Your Cold Symptoms

Having a cup of hot tea has been a remedy for sneezing, stuffiness, and the common cold for many, many years, just like using ice to calm a burn or a throat lozenge to stop a cough. Hot liquids like tea are thought to loosen the secretions that can develop in the sinuses and chest, making it easier for the individual to expel them, which will ultimately lead to clearing up their congestion. Additionally, the fluid being consumed should help to eliminate any dehydration the individual may experience.

Adding honey to tea is another home remedy that many people have been following for a number a years. Honey is thought to help soothe a scratchy throat and, when antibacterial rich honeys like Manuka honey are used, they are also thought to help fight off infection and boost the individual’s immune system. While the true effects of Manuka honey and adding honey to tea in general have not been explored, many people swear by the honey and tea combination when it comes to battling a cold.

While we have been using hot liquids like tea for as long as we can remember, it has only been recently that scientists are exploring whether or not this remedy actually works. According to an article featured on NYTimes.com, researchers from the Common Cold Center at Cardiff University located in Britain began examining whether or not hot beverages actually relieved cold symptoms this past December. The study included 30 individuals who were suffering from a common cold or the flu.

Researchers took two groups during the study, giving one hot liquids and one room temperature liquids – the results were surprising. “The hot drink provided immediate and sustained relief from symptoms of runny nose, cough, sneezing, sore throat, chilliness and tiredness,” the researchers noted, “whereas the same drink at room temperature only provided relief from symptoms of runny nose, cough and sneezing.” While this has been the first study surrounding hot drinks, other studies have looked at the effects of hot foods, such as chicken noodle soup, and how they combat the symptoms of a cold or flu.

Although more research will likely be done on this subject, the results of the test done by the Common Cold Center at Cardiff University give a clear indication that this home remedy for cold and flu symptoms is effective, especially when compared to consuming the same liquid at a different temperature. The bottom line – when you’re feeling sick, don’t be afraid to reach for a hot cup of tea with some Manuka honey!