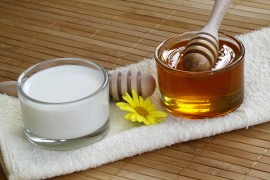 There is just something about honey that people love. From Pooh digging into a fresh hive for the sticky treat to adding sweetness to our favorite tea and even a soothing bath, people just love honey! This wonderful item has been around for centuries, and used in far more ways than just as a sweetener.

Just when did honey become so popular? Well, if you believe the writing on the walls, literally, there is documentation dating back almost 10,000 years ago. Paintings on the walls of caves in Spain have been dated back as far as 7000BC. But, there is evidence that bees were around long before that, as fossils over 150 million years old have been found of honeybees.

It is no secret that the most beautiful women of ancient Egypt used honey as a beauty product. It was common for them to take baths of milk and honey. It was also used in various foods and obviously, as a sweetener. Honey was very popular in Greece not only as a food and beauty product, but also for medicinal purposes. This “liquid gold” was also, appropriately, given as a gift to the ancient gods.

The honeybee was first introduced to North America in the 1600s. While there were bees on this continent prior to that, they were not known to produce significant amounts of honey. When the European settlers arrived in America during this period, that would all change, and honey would find its way into North American culture much like it had the Egyptian, Greek, and European cultures for centuries.

In recent years, honey is once again making a name for itself as much more than a sweetener. We are learning more and more about the benefits of eating pure, raw honey as well using its application in skin care products and some holistic benefits. As a consumer, you just need to make sure you are buying pure honey, not the processed honey in the cute little bear.

At Manuka Honey USA, we offer products exploring all of the natural benefits of honey. For instance, we have Active Manuka Honey UMF® 16+ that can be used as a sweetener and even applied directly to your skin to help treat blemishes. We also offer soaps and oils to soothe your skin as well as honey candy that can serve as a throat lozenge.

For more information about our full line of Manuka honey products or to place your order, please click here.